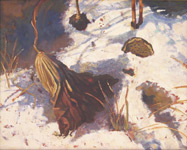 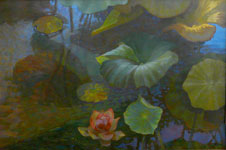 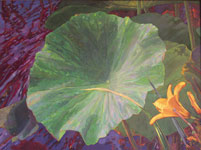 Shown here are a few of the paintings that were a part of my one man show titled "Lotus". During this time I was going through treatment for breast cancer which included chemotherapy and radiation. I really identified with the life cycle of the Lotus and it became a very important symbol for me. My dear friend Mindy Olson wrote a statement for this show which I will always treasure. I have included it here...

The lotus is a wondrous creation. Did you know that every single part of the lotus plant is used as food and/or medicine? That lotus seeds as old as 2,000 years have germinated? That a lotus seed contains an enzyme that repairs proteins?

In the Hindu and Buddhist religions, the lotus or in Sanskrit padme, symbolizes the soulâs endless cycle of rising from darkness into light. "Om Mani Padme Hum" is the mantra that revolves around countless Tibetan prayer wheels and is chanted by devout Buddhists many times a day.

It loosely means, "I am the jewel in the lotus," and it describes the union of self with Buddha-hood. Mani means a gem-like hardness, like a diamond, but when I think of a jewel in a lotus I think of a drop of water, Evanescent.

Maybe "mani" refers to the seedpods, adamant casings that look like shower heads from another world. This phrase is simple and very complex all at once.

Bobbiâs lotus paintings meditate on the murky depths that give birth to lovely flowers, the wide circular leaves that are platforms between the two worlds, the seasons and hours that reflect in the water and that live through the plants themselves.

Friendship, beauty, contemplation: These transcendent elements of our lives cheer us through the trials, and, I do believe, change us for the better.
â
Mindy Olson

Mindy Olson is a writer whose work has been published in The New York Times, The Village Voice and other publications. She lives in San Diego, CA